Alex dreamed of becoming a famous basketball player when he grew up. He idolized players like Kobe Bryant and Lebron James and would dream about playing alongside them while playing basketball video games and dreamed of his future. At ten years old, Alex was like many of the children I have helped in my career. He dreamed big, often ignoring his homework to play video games and dream about what he wanted.

“You want to be like Kobe Bryant. How many times does he practice each week?” I asked him one day.
“He practices five hours a day every day!”
“That’s a lot. How many times do you practice a day?”
“I play with my friends a couple of times a week.”
“So you don’t practice, you just play?”
“Yes.”
“Can you practice five hours every day to be like Kobe?”
“No.”
“Why not?”
“I don’t have the time.”
“Well, what if you stopped going to school? Would you have time then?” I joked with him.
“No! I couldn’t do that.”
“What could you give up to practice like Kobe?”
Alex thought hard for a long moment, then said, “My video games?”
What you and I see as an obvious answer to a ten-year-old boy, giving up something as fun as video games, is the last thing he would think of. It brings him joy! Why would he stop doing that? Alex learned a valuable lesson that I taught all of the children that I worked with at Empact. If you want something, sometimes you have to give up something.

Our drive to move forward in our daily lives can oftentimes hinder our progress. If you continuously move in one single direction, you may miss what you are aiming for.
The simple fact of giving up goes against everything we are taught;
In order to succeed, you must win.
There is only one winner.
Second place is just the first loser.
If you look at those three statements, you’ll notice a hidden message:
You one loser.
How can you be a loser if all you do is win? All you have to do is look at some of our political leaders for an answer to that. If all you do is win? How can you know defeat? Albert Einstein created one thousand and one lightbulb. Guess how many of them worked? One. He failed one thousand times. Can you still keep persisting on after failing a thousand times? How about five hundred? How about one hundred? On average, people give up after they fail 8-10 times. Failure is what makes us stronger. Better.

Personally, I have failed a lot. And I will continue to fail at many things. That’s just a part of being human. The trick is to not let that failure stop you from growing. You must be willing to push past it and continue down another path toward your goal until, eventually, you will arrive. If not, get comfortable where you are. You’re not going anywhere.

舍得 is a very popular phrase in China with many interpretations. Here are three ways that I interpret them.

First, to gain.
My first experience with giving up to gain something else was when I started applying for middle school. The school in my village was average, and I wanted better than that. I decided I would do the impossible and be accepted into one of the most prestigious middle schools in China. I studied hard for this, giving up on other activities and hobbies that I enjoyed.  Even sleep! My father would come in to tell me it’s time for bed.
“Five more minutes.” I would say. That five minutes would turn into an hour at least. My hard work and dedication paid off, and I was accepted into the school that I wanted.
To give up things we enjoy doing is very difficult, even for the most dedicated. But if you can do that, then you can do anything.
Ask yourself, “What is something that I want to do?” Then ask what you need to give up in order to do that.

Second, to give.
Sometimes, the thing that you need the most is the thing that you need to give up. Financial security is a major concern for all of us, and many people will not take the risk required to make a major change to achieve a dream. I am guilty of this as well. We will pay a therapist $600 an hour to listen to our problems, but we won’t spend $50 for subscription fees for a product that will help you reach your goal.
Elon Musk, Jack Ma, Tony Robbins, and many of the richest and most successful people in the world have lost more money than you will make in a lifetime.
Many of your favorite actors spent years sleeping in cars and living on Top Ramen for months or years before earning a livable wage.
Companies that continue to stick to a backward hiring policy requiring expensive four-year degrees miss out on top candidates as the job market changes, leaving them unable to keep up with the competition and eventually leading to the companies’ collapse.

Giving up goes against everything we are taught, but it is the one thing needed to move forward.

Lastly, while I was at ASU, many of the students I worked with complained about a bad relationship. When I ask why they don’t leave them, the answer is always the same.
“I could never do that! I love him/her!”
More than likely, they are afraid of being on their own. Many young college students who attend a school away from home are alone for the first time and cannot handle it. They will stay in a bad relationship just to avoid being alone. Not because they are afraid of being alone, they have just never done it before. They are afraid of the unknown. I explained this to them, and many recognized this and began to take action to get out of or improve the relationship. Often, the thing we have to give up is not a task or a fun hobby, but our own fears.

Sometime this week, sit down in a quiet room and write down everything you like to do. A new career path? Starting a new hobby? It can be anything.
Next, write down the things that are stopping you from doing this. Compare the two and see what you can give up to start that new hobby or begin a new career path. If we can begin seeing giving up as a positive, when we begin to use our failure to push us forward instead of shrinking back, we will find that we can do anything that we put our minds to. 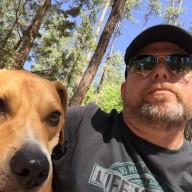 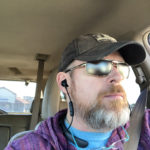 My name is David g Haddon and I am a writer, a photographer, and a dreamer. It’s selfish of me to keep these thoughts and images to myself so here I am sharing pieces of me for your enjoyment.

Such a good boy. #nomadlifeover40 #dogsofinstagram